I’m going to call it right now: The Arrow After Show Team of Adam Kruger, Jack Hind, Carolina Bonetti, and Olivia De Bortoli has to be the most passionate group of hosts I have ever seen.  Why am I saying this?  Read on and you’ll understand.  We all know that this week’s Arrow episode “Taken” dropped a lot of bombs on the characters — Oliver revealing to Felicity that he had a son; Felicity finding out that she was the last person to know this; and Thea finding out that Malcolm was behind the kidnapping of William.  With these plot points in mind, watch our hosts stand firm and strong in their opinions on what the characters did and what they should’ve done … 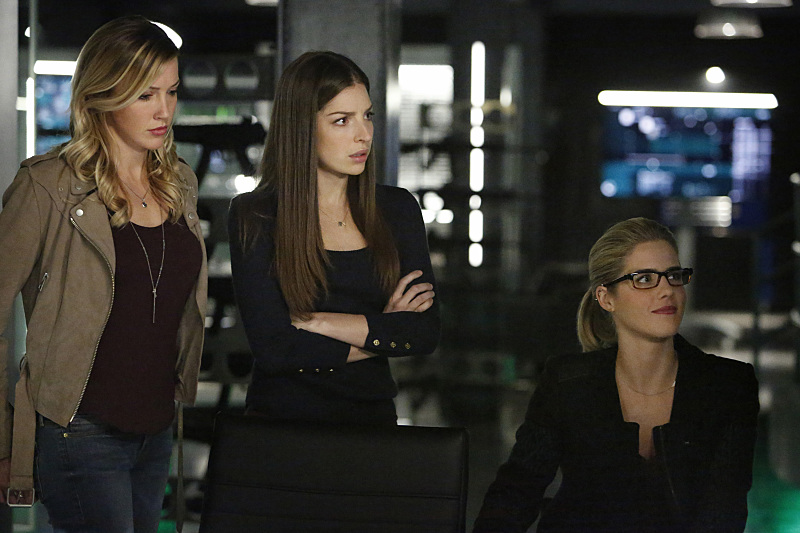 We all knew that this was going to happen.  Felicity was going to find out about Oliver’s son at the most inopportune time.  To compound that problem further, she gets the news from a very nasty encounter with Damien Darhk.  How did Felicity handle his news?  Not well.  I mean, seriously, how did you think she was going to handle it?  First off, after finding out that Oliver kept this secret from her, everyone else blurted out that they already knew about Oliver’s secret progeny, as if being in a wheelchair wasn’t already hard enough.  I’m surprised she can even function normally after that.

And it seems that Adam agrees with me on the subject of Felicity’s resilience.  Knowing that a child’s life was on the line, Felicity locked her feelings up and was pure 100% business.  Talk about a professional.  We’ve seen Felicity grown quite a bit on the show.  Starting off as a nerdy, shy, awkward IT specialist, her character has arced into one of the strongest and most interesting of all the Arrow characters.  Like what Adam and Carolina said — this girl’s been shot, lied to, kidnapped, etc.  It almost seems like the show is setting her up to be one of the most dysfunctional characters of all time, but she just comes out stronger — every time! 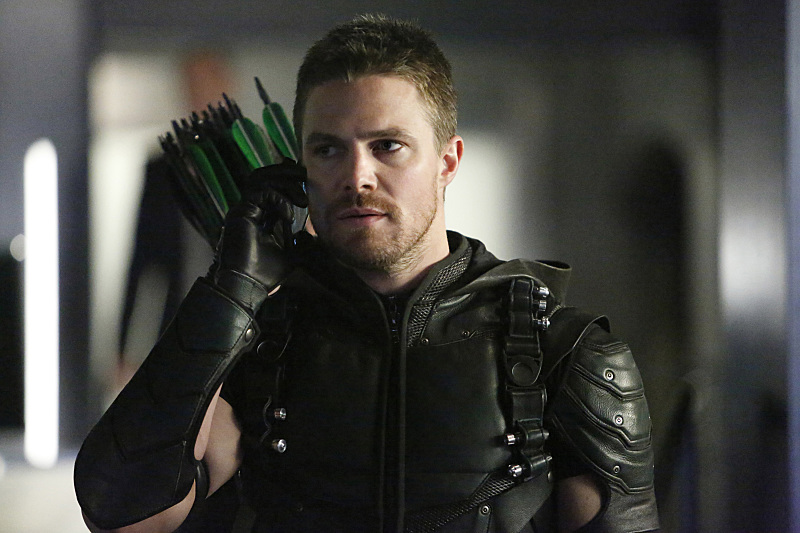 Adam, I fully agree with you that Oliver telling Samantha of him being the Green Arrow was quite jarring.  I’m wondering if the writers did that to show Oliver not wanting to deal with keeping secrets anymore.  Carolina thinks that Oliver should just put his name up on a billboard, telling everyone about his nighttime escapades.  Awkward as that scene was, it seemed necessary for Oliver’s character at that moment.  He didn’t have time to tip-toe around the issue, and he needed to gain her trust.

Vixen’s a Total Beast (In More Ways than One) 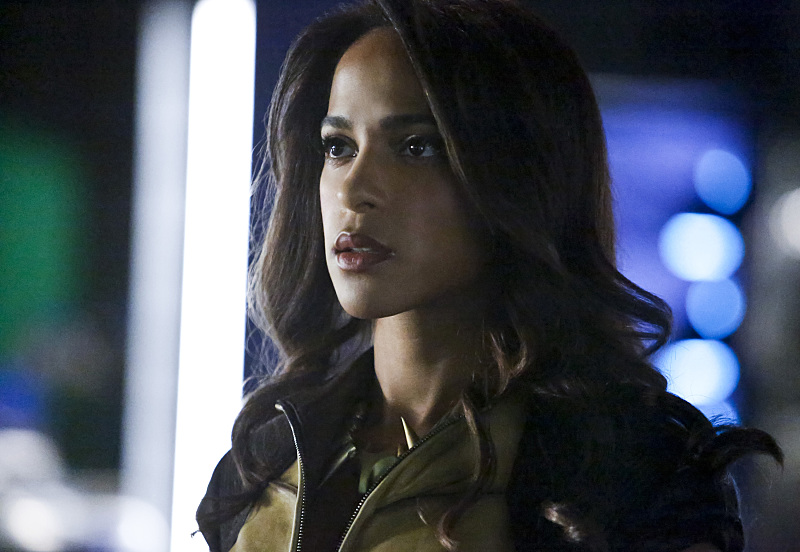 And I mean that in the most respectful way possible.  Vixen made her jump from animation to live-action tonight, as Team Arrow needed someone who had some magic.  Yeah, Constantine wasn’t available.  He was literally in Hell.  But the character of Vixen is welcome on this show anytime.  Now, our hosts had a problem with the line “How about I kick your ass like a woman!” because they thought it was overplayed.  Hence, why I’m hardly ever on social media or watching every single promo out there.  For me tonight, I lived the mantra “ignorance is bliss.”  I loved that line and it was fresh for me.

Vixen’s appearance really upped the excitement of the episode.  She also acted as a great soundboard to Oliver when he questioned whether or not to tell William that he’s his father.  And Jack, to me, I think her costume reminded me of what they rejected when they were creating the Reverse-Flash’s costume.  Although when you brought up the X-Men, I could see that too. 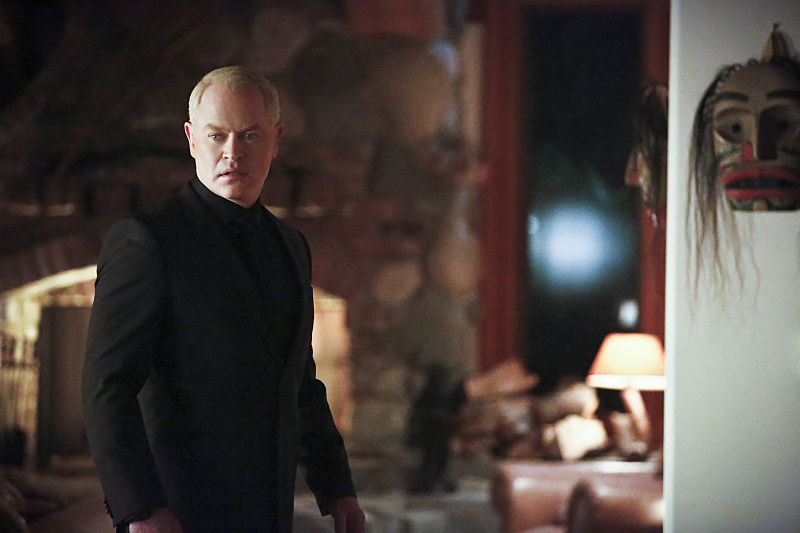 This is where our hosts really dug into, the supposedly, dastardly Damien Darhk.  This villain is so powerful that he can choke people over satellite, but when it came time to fight, he was easily defeated by Oliver.  Olivia brings up a good point that Darhk may have been out of practice.  When you rely on your powers so much, I guess you become the League of Assassin’s version of “fat and lazy.”

Damien did have his moment though, as Carolina so keenly pointed.  One of the funniest lines came from Damien when he said, “So that just happened.”  Yep, the powerful HIVE leader knew he was screwed when Vixen leaped over him and took his precious totem. Like Jack, I was quite curious as to why he would keep such an important item out in the open.  Yes, keep it near you, but keep it concealed somewhere.  This seemed a bit too convenient for our heroes. 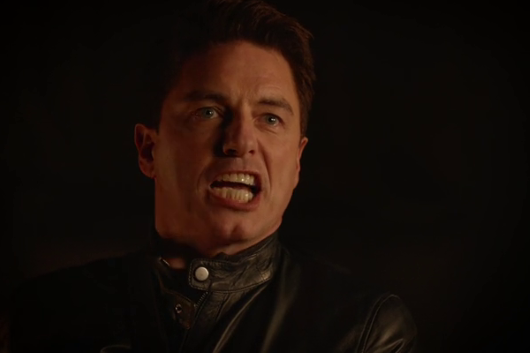 Jack’s words, not mine.  But they are probably the most appropriate words describing Malcolm.  How many more times is this guy going to lie to Thea in the name of fatherly love?  I love how Malcolm justifies everything with “I did it to save your life, Thea!”  Really?  How does kidnapping a 10-year old boy save the life of your daughter?  In addition, this boy is your daughter’s nephew.  I would love to study what’s actually going on in that head of his.  He may not have used the Lazarus Pit, but he sure acts like he’s taken one dip too many in that insanity pool.

When Adam questioned if Thea will move on from Malcolm, both Olivia and Carolina thought that there won’t be a clean break.  I will completely agree with that.  Malcolm has a hidden ace somewhere up his sleeve, and he’ll use it when he needs to get Thea back.

The Team Re-Ignite Their Arrows 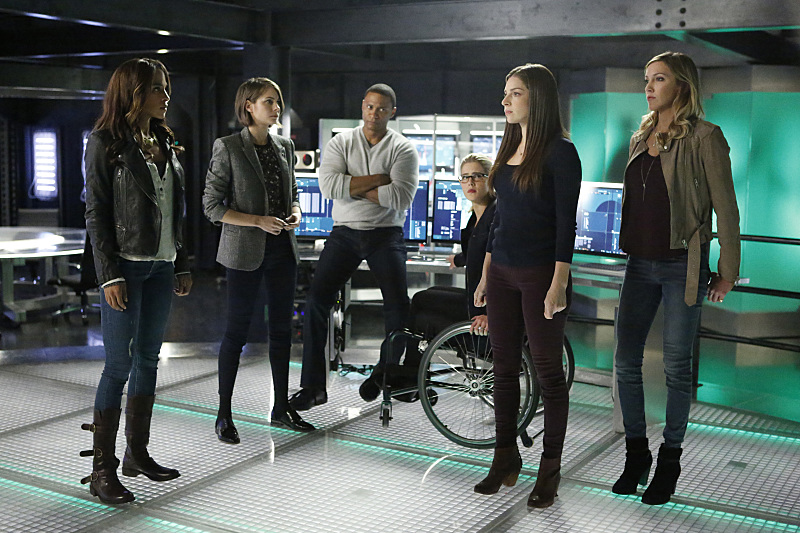 Here’s where the team heats up … again (remember last week?).  Both Adam and Jack thought this was a strange scene: after a heart-to-heart with Oliver about being lied to, Felicity’s chip kicks in and she just stands up and walks out.  Olivia and Carolina thought it was perfect.  In Carolina’s own words, “That is legit, girl!”  The contention here is that Jack thinks Oliver has been through so much with Felicity that when she actually regained the ability to walk, all of what transpired in this episode should’ve been put to the wayside, temporarily.  She should’ve celebrated the moment with Oliver.

Carolina and Olivia do not think Oliver deserves an iota of Felicity’s happiness after all the lies.  Olivia also brings up the fact that Felicity just took her engagement ring off and put it on the table.  There is no celebration to be had.  Carolina ends it with a double karate chop (you’ll have to watch the After Show).

To play Malcolm’s Advocate (see what I did there?), I agree with both points-of-view.  And this is why.  I think the writers intended Felicity walking off as a symbolic gesture — meaning she’s literally walking out on Oliver.  It might’ve sounded like a cool and smart scene in the writing room, but it came off as awkward to the viewers.  I agree that Felicity’s regaining of her ability to walk — in a character reaction sense — should’ve elicited emotions that trumped her moment of anger and disappointment.

If you guys haven’t watch this week’s Arrow After Show, I suggest you go do it right now.  I’m not kidding.  Fire up a new a browser and go here.  Do it!  Do it now!  I’m saying that in my best Arnold Schwarzenegger voice.

What did you think of this episode?  Do you think Oliver should’ve revealed to William that he’s his father?  Was it right for Felicity to just walk out on Oliver?  Adam, Jack, Carolina, Olivia, and I want to hear your opinions.  So sound off in the comments!

Make sure to visit Nick Tylwalk for his written recap of “Taken” at Bam Smack Pow.