It’s hard to focus on just one scene from an episode of Arrow when we discuss any edition of the Arrow After Show. The hosts do such a good job covering all of the pertinent developments each week that they leave hardly any stone unturned, and the fans tweeting or commenting on YouTube with questions ensure every base is covered.

But sometimes there’s something the crew reveals on the live show that makes you sit up and take notice, and this week had one of those moments.

Let’s set the stage just a bit: In this week’s new episode of Arrow, “Canary Cry,” Oliver Queen and his team have to deal with the fallout from the death of Laurel Lance, better known as Black Canary. Along with the usual self-blaming — in which Oliver is joined by John Diggle, who usually argues against that — things get a little complicated thanks to an imposter running around with Laurel’s costume and Canary Cry.

Along the way, we receive repeated assurances that Laurel is really dead. Nyssa al Ghul arrives and tells a grieving Quentin Lance that the Lazarus Pit is no longer an option. We also finally see the funeral scene that the series has been teasing since the Season 4 premiere. 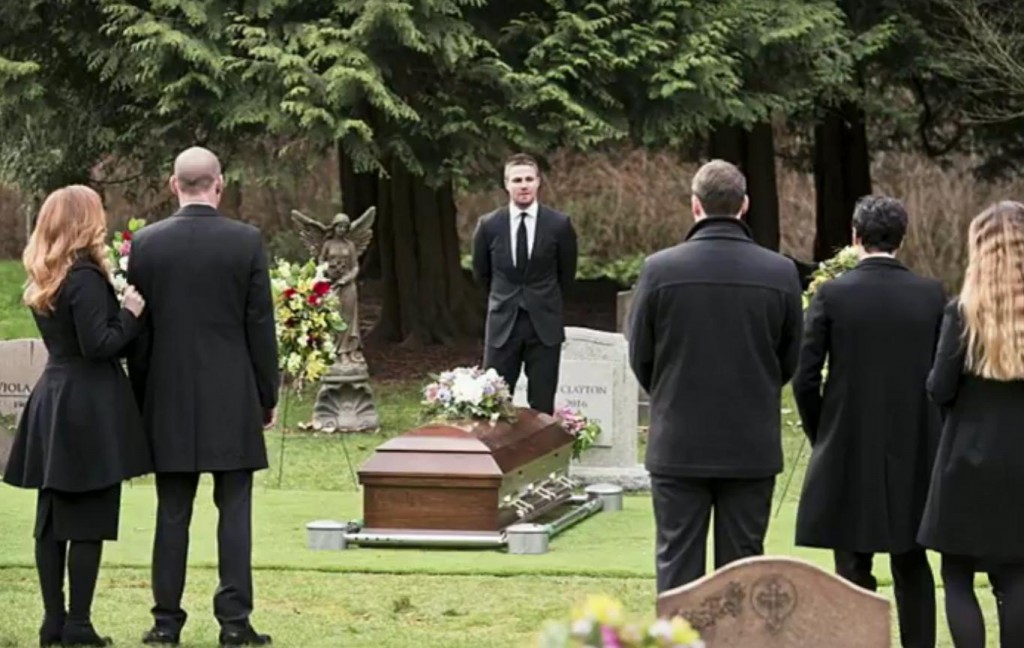 Take a look at the name on that tombstone. Clearly, that’s the last name Clayton, and if you squint between Stephen Amell’s legs, there’s a ‘W’ there as well.

When pointed out by Adam Kruger, fellow host Jack Hind blurted out, “That says W. Clayton!” As in William Clayton, Oliver’s son.

The discussion mentioned several possibilities. It could be a red herring, or perhaps just sloppy editing. Adam started down one path by saying, “Maybe that was released before …” Yet he never finished that thought.

So we’ll finish it for him. Here are two possibilities that could explain the name on the stone:

1. The producers shot that scene with the incorrect name to throw fans off the scent.

Our friends at Bam Smack Pow had a regular feature earlier this season in their Arrow recaps called #GraveWatch, tracking the most likely person to be the subject of the funeral scene from week to week. For a big chunk of Season 4, all signs pointed to William being killed off, at least until his safety was assured by having his mom leave Star City.

The minds behind Arrow had to know this was the case, and that fans expected William to be the person whose death sent Oliver into “determined to kill Darhk” mode. So it’s possible they shot this scene with William’s tombstone intentionally just to maintain the surprise of Laurel’s fate, simply never bothering to send out other publicity photos or re-shoot the scene with the right name. This seems 100 percent logical.

2. The producers actually changed their minds about who was going to die.

This is merely wild speculation on the part of this blogger, but what if the writers and producers shot the funeral tease in the season premiere without knowing who was going to be in the grave? Surely, there was a broad outline of how Season 4 was going to go down before any filming commenced, but details do sometimes change along the way — and 18 episodes is a lot of time to decide to switch things up.

Interviews with the actors back toward the beginning of Season 4 showed that they didn’t know who was going to end up in the grave. Maybe the people shaping the story didn’t know either, or they ended up zigging where they were going to zag. 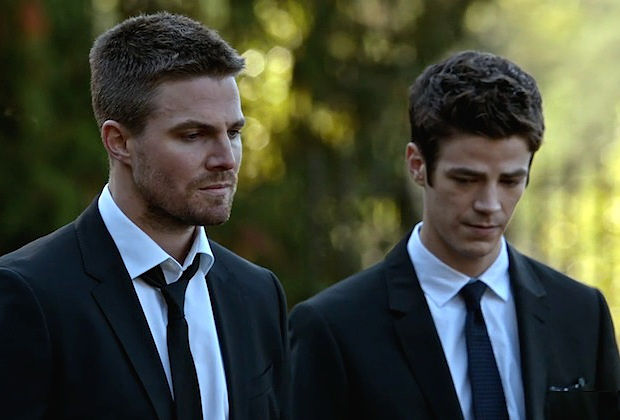 Another thing the Arrow After Show hosts pointed out was the poignant Quentin Lance and his struggle to accept that his daughter was really gone. Jack called Paul Hawthorne “brilliant,” and Adam added:

When he broke down, that hit me right in the feelers.

Agreed. All the feels.

It takes both Nyssa and Oliver to convince Quentin that there’s no way to bring his daughter back. Yet when Barry arrives (with his super-speed, meaning this episode was clearly out of sync with current events on The Flash) and asks if there’s anything he can do, one wonders if Oliver considered asking his friend to use his power to go back in time to save Laurel.

Barry might not do it if asked, as he knows the consequences for messing with the time line. Oliver knows that as well, which is probably why he wouldn’t ask. Yet there has to have been a moment where it crossed his mind.

(Side note: Barry shows up late for the funeral, apologizing for missing it due to Zoom issues. He asks Oliver if he can do anything, Ollie asks to be left alone, and then Barry sprints away. Why even bring Grant Gustin to the shoot for that?)

There’s much, much more to this week’s Arrow After Show, so be sure to watch the whole episode for more discussion of what was likely to be the most depressing installment of Season 4 — at least one can hope!

Did Jack need to spoil the plot of Beerfest? Will Olivia make blowing kisses to the fans the new way to start every Arrow After Show? Was Carolina just too bummed out to join her fellow hosts this week? Sound off on these and other pressing issues by hitting us with a comment below or tweeting the hosts with the hashtag #ArrowAfterShow.