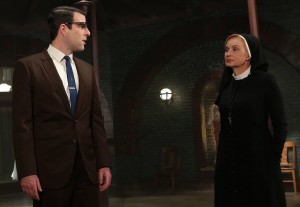 There are so many great performers who have graced AHS with their presence.  Having Jamie Brewer in studio last week reminded me of how much I miss her on the show!  A lot of fans are also missing AHS legend Jessica Lange this season, but they aren’t the only talent I wish would pay the Hotel Cortez a visit…

I love Zachary.  He can play so many different roles from geeky Vulcan to Villianous Hero to sociopathic serial killer.  I mean wouldn’t Dr. Oliver Thredson be a perfect guest to James March’s serial killer dinner?!

Kate Mara was so captivating in season one, as a conniving young woman caught in an affair with an older man, that it probably helped her get her role on House of Cards (again another affair with a man twice her age).  Of course Kate has moved on to films and usually actors who make that transition take a large break from television.  Still though, I can picture her roaming the halls of Hotel Cortez, haunting guests and giving Sally a run for her money.

This man has a Best Supporting Emmy for his nightmare inducing role in AHS: Asylum so why hasn’t he come back?!  His role as nazi-loving crazy doctor Arden was so good that the next time I watched Babe I was running at the screen for the little piglet to run for his life!  He’s such a talented and legendary actor I feel like he would be a great addition to Hotel…he would be well suited to play James March’s father.

I will go on record to say that Frances Conroy is one of the best character actors to ever be on AHS.  I loved her in season one as the kinky ghost maid but she really captured my attention as the Angel of Death in season two.  She was so effortless in that role.  She can disappear into a role as well, her fabulous look as Myrtle Snow with her wild red hair and think framed glasses was unmatched.  Let’s have her check-in immediately to the hotel, she could teach Miss Evers a thing or two about cleaning.

What do you guys think?!  Who would you like to see check in at the Hotel Cortez?  Sound off below and tweet me @kristincarole13 with the hashtag #AHSAS !  And don’t forget to check out our AHS Aftershow!  Last week we had on special guest Jamie Brewer!