For this week’s Thanksgiving episode, we got to see our favorite characters in 3 different scenarios. First, we have Raj, Emily, Howard and Bernadette volunteering at a homeless shelter for the holiday. It was really nice to see these characters partake in the wonderful tradition of helping those less fortunate than themselves. Howard, of course, is the one who has to be dragged along unwillingly, only so he wouldn’t have to spend Thanksgiving with Sheldon at the aquarium.  Little does he know that he will meet one of his biggest idols, Elon Musk, who happens to be volunteering as well.  They have a private conversation and Howard, by pretending that he’s actually happy to be there, gets the opportunity to exchange emails with Elon in the hopes of possibly working with him in the future. 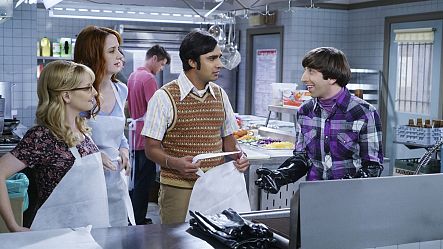 Simultaneously, we see Penny and Leonard at home preparing dinner for everyone.  When Leonard finds out that Penny doesn’t know his birthday, he precedes to rub in her face that he knows almost every detail about her until….he mentions the fact that she hates the lingerie that he gave her because she said it makes her look like “a slutty carrot”.  Penny knows she never told him this bit of information because she’s never told anyone, but she did write it in her diary. After working out that he read her entire personal journal, Leonard realizes that he has to do something to make it up to her. And here’s the part that had me crying laughing (and is one of the many reasons we love The Big Bang Theory so much)!! Enter Leonard in the awful orange lingerie mentioned earlier…and white socks.  He decides to give her a show and right when the “twerking” begins, in walks the gang. It’s a moment we can never un-see but dang it if it didn’t make for some hearty laughs.

And lastly, Sheldon and Amy finally spend some time together. They decide to use the tickets Sheldon has to the aquarium to enjoy Thanksgiving dinner with the creatures of the deep sea. On the ride there, they get into a conversation about the men Amy’s been dating and serious nature of it all. Once that is all cleared up, we see them touring around the aquarium after a disappointing cafeteria dinner.  They proceed to play a new game Sheldon came up with called “Food, Friend, Fight” and, after playing, Amy mentions (with heartfelt emotion) that she “misses this”. Sheldon, of course, doesn’t catch the true intention of her statement, which I believe made him even more endearing to her. On her way home from her mother’s house, she decides to call Sheldon and tell him that she thinks she’s ready to be his girlfriend again. In a heart wrenching moment, Sheldon tells her that though he excels in many things, getting over her was not one of them. He continues by saying he thinks he can only be her friend. Seeing Amy’s subtle reaction crushed me. You can see the devastation and sadness in her eyes. Waaaah, ShAmy’s still not together (even though rumors have it that will change in the next couple of episodes)! 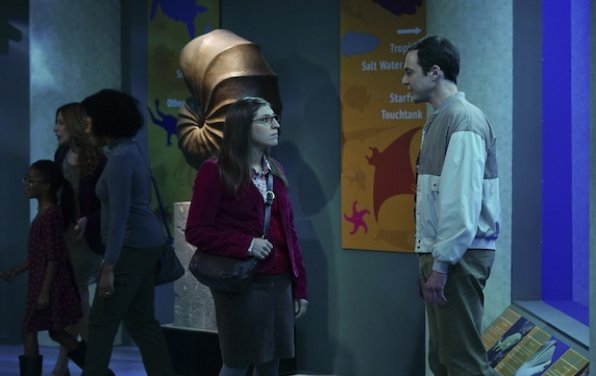 Will Howard get to work with Elon Musk? Can we ever get the image of Leonard in orange lingerie out of our heads..EVER?! What do the next 2 episodes before the winter finale hold for Amy and Sheldon? Tune into the newest episode on December 10th for some answers along with guaranteed laughs, then join us live via YouTube for our aftershow! Make sure to tweet us using #BigBangAS and we look forward to hearing your thoughts and/or questions.