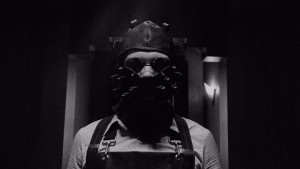 Who’s the Most Evil One of All?

With the introduction of James March, Evan Peters said this character is truly the most evil one he’s ever played on the series.  Which got me thinking: there are so many deliciously evil characters in this season of American Horror Story, but which one takes the cake?

Is James March the Most Evil?

March is an especially evil character because he’s based on a real person, the first serial killer HH Holmes!  Like Holmes, March built a hotel as torture chamber, letting people check in but never check out.  In only one episode we’ve seen him slit several throats (including his own), whack men in the head and toss them into a garbage shoot, have sex with a woman as he is killing her and of course basically putting up bricks to hide a girl tied up, to die in the walls.  It would seem he could be the most heartless character in the show so far, but there was slight humanity.  March made reference that his father was terrible and obviously he’s had a bad past with religion as well, telling a victim religion is the worst.

Is the Countess the Most Evil?

She will quite literally eat you for dinner.  So far she hasn’t tortured her victims, but she’s had many horny people die at her hands – the young couple from Cinespia and the guy Tristan picked up from Grinder.  Not to mention she lures little children away from their families, turns them into vampires and drinks their blood daily.  Probably the most evil thing she’s done though is breakup with Matt Bomer after he wanted to watch a House of Cards marathon with her…who does that?!  Must be pure evil!  To her benefit, there’s obviously some heartbreak there, as she hinted when she broke up with Donovan.  Is she really cold hearted or just broken hearted?

Is the Addiction Demon the Most Evil?

But I think the Most Evil Is…

Yet to come.  Yes I know this is a cop out, but I honestly believe we haven’t seen the most evil person yet.  There are rumors the Devil would show up this season at some point.  I also think Tristan can only get worse with his new found immortality and with Mr. March as his mentor.  Lily Rabe will be guest starring soon as the infamous murderer Aileen Wuornos and knowing Ryan Murphy there will be a huge twist with her history.

Who do you think is the most evil this season?  Tweet me @kristincarole13 I’d love to hear your thoughts!