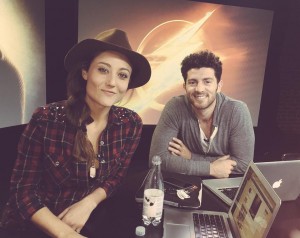 So these first two seasons we have seen ‘The Flash’ battle some pretty intense villains and superheroes. I was just wondering who YOUR favorite was and who you think Barry has struggled with the most?

Now, here’s some food for thought… what if you could have Barry fight another superhero or villain from the Marvel comic book universe? People tend to argue that DC characters are more powerful overall than those of the Marvel world. Do you agree? Does it make it more intriguing to have superheroes that aren’t all-powerful? I think that the writers of CW’s “The Flash” has honestly done a pretty great job of making Grant Gustin’s version of ‘Barry Allen’ pretty relatable. Now, that could potentially be because Barry is still learning how to use his powers to his full ability. I look forward to seeing how the writers will continue to make us root for Barry as he becomes more and more untouchable.

I think he’s gonna need some of that extra awesome-sauce considering how badass we now see that Zoom is from this episode!

BUT… if ‘The Flash’ were to fight a Marvel character, I’d love to see him vs. Thor!

PS. IF you guys also like music in addition to super cool comics, check out my music video “What Is Love” with UFC celeb fighters like Urijah Faber. CLICK HERE!