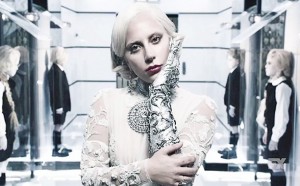 If you’re anything like me you’re still digesting the bizarre concoction that was the AHS Hotel premiere! Multiple WTF moments were shared by all during many parts of the 90 minute episode so I thought I’d go ahead and give you my top 5:
THE ATTACK OF THE 10 COMMANDMENTS KILLER!
Holy smokes! What a detailed psychopathic murder! Did this bloke kill the girl first, staple her on top of the man and THEN cut out his eye balls and tongue? And if so, what tools does one use to rip out someone’s eyes balls? And the glue.. I have so many questions… Epic opening scene none the less and really set the level of crazy for the rest of the episode.
THE MATTRESS MONSTER
The main WTF moment for me in this scene was not the bald mattress zombie the Swedish girls stumbled across, but the fact they didn’t run straight the hell out of that hotel and just moved into another room!? WTF
ADDICTION DEMON / DRILL DILDO
This was absolutely insane. Would love to chat to Ryan Murphy about the thought process on this one… Was a regular zombie monster just not cutting it in the original scenes so they had to step it up with a drill bit dildo? Genius none the less. Cringe worthy stuff and really makes you wonder how long it would take you to die from being repetitively stabbed in the bum? Yikes.
THE LADY GAGA FOURSOME
I guess it’s mainly because it’s Lady Gaga. A vampire foursome on American Horror Story is something you’d probably accept without too much hesitation after previously enduring 4 seasons of AHS madness. But throw one of the biggest pop stars in the world in the mix, a ton of nudity and a sprinkle of neck blood and you have yourself a big fat WTF moment right there.
THE VAMPIRE KIDS
Apart from the scene where they were feasting on that poor sexy Swede, the kids actually seemed quite pleasant playing video games and eating candy. It’s mainly the fact they are obviously kidnapped and converted into who knows what that I am giving this one a predictive WTF! You just know it’s going to be a messed up scenario.. if it isn’t enough already!
Agree with my top 5 or have another one you think I missed? Tweet me @XavierBrinkman! Cheers!
Posted in American Horror Story Blog