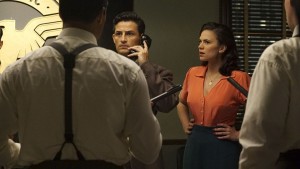 Overwhelming love and adoration… That is what virtually every internet outlet is reporting on this week’s Agent Carter episode; Smoke and Mirrors. Truth be told, this episode is easily the most complete of the season, yet I still find myself unavailable to give it the bright and shining reviews that the rest of the world is eager to bestow upon it. 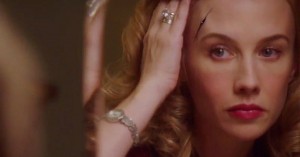 Is it because I’m a salty cynic who simply cannot find joy in anything? No. There is something missing from this season so far: while the writing and character development has been superb, the central plot has lacked gravity. Last season dealt with the threat of deadly terror attacks from within an ever-growing infrastructure hell-bent on, well, destruction. This season we have the same old Hydra (who wont do anything of merit for 70 years!) and a woman who turns other people, and sometimes rats, into goo while her face cracks open. That’s right, rehashed plots and scary lady with a goo power.

Am I alone in wanting more for Caps number one gal? Undoubtedly, Mistress Goo and Hydra will threaten national security this season… That’s what they do, right? They build/steal a device and seek to takeover/destroy America. But we already know this isn’t going to work because we live in the “future” MCU. In our world, Hydra has made their penultimate play and, SPOILER, Lady Goo isn’t part of it. So. in a way, none the actions taking place matter. Sure, the show is good and innately watchable, but are we moving to a point where it really doesn’t matter? And if it doesn’t matter, why are we watching… 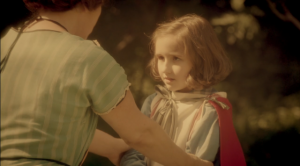 Like I said, I didn’t hate this episode. I loved the juxtaposition of Peggy and Whitney and how their very different environments helped to shape at least somewhat similar individuals into vastly different, yet fully fleshed out, characters. Seeing Whitney take control of her destiny in her final flashback came across as a liberating experience for her. Yes, she was “dumbing herself down” and giving in to her mother’s trite advice about trading on her looks, but she was doing it on her terms and for her own, as yet unknown, goal. Whitney, or rather Agnes, as she was, had silently agreed to play the game of a system that trapped her, and her mother, in a sad merry-go-round of unworthiness and dependency in order to find genuine independence; she withheld her intelligence in order to tip the game in her favor, but was free, so long as she could keep the mirage going.

Peggy, however, finds her freedom in the reverse of Whitney’s situation: while Whitney found her freedom in a willingness to “play the role” by using people’s preconceptions of a “pretty girl” to her advantage, Peggy found her freedom through eventually rejecting the constrictive idea of “normal” by accepting she would never be satisfied, or rather, fulfilled, by the small, quiet life expected of her…

Even this… Am I drawing conclusions that aren’t there because I’m searching? I just want MORE. In a way, I am so eagerly searching for a weightier plot that I am finding new ways to fill that desire. For the second week in a row, I find myself far more concerned with hidden Easter Eggs (Hello Broxton, OK) and attempting to create possible ties to the future (Did Whitney Frost give Stark the prototype to the Arc-Reactor?). Sure this is all well and good, BUT I WANT TO BE DRAWN IN BY THE CURRENT SHOW.

I’d say that’s more than enough for this week, be sure to watch Agent Carter, Tuesdays on ABC and then tune in to the Agent Carter After Show, Wednesdays on TheStream.TV.

Join our Facebook Group, The Agent Carter After Show.