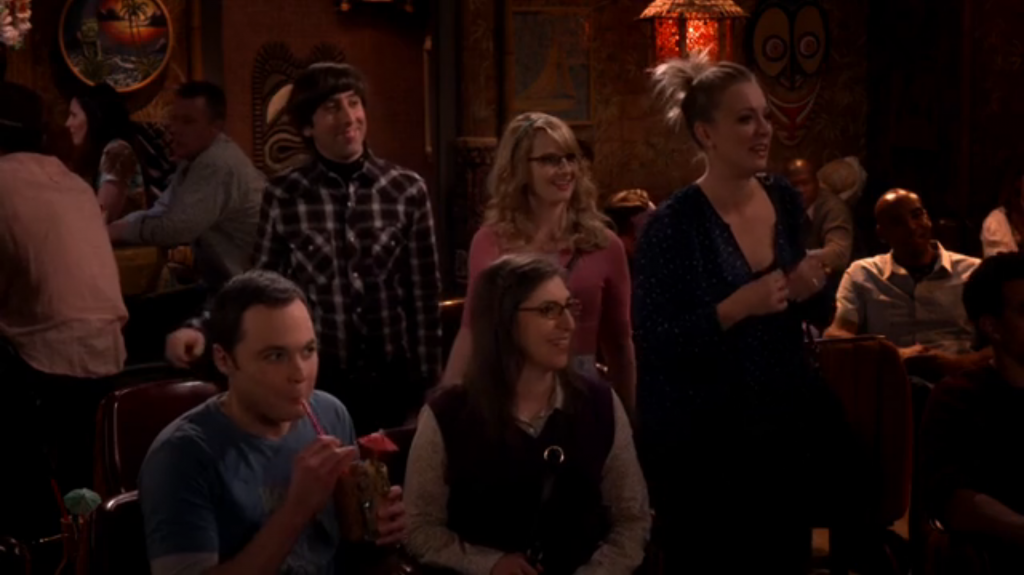 It’s only fitting that the title and headings of this latest article resemble formulas.  First of all, it’s nerdy.  And when it comes to The Big Bang Theory, you can never be too nerdy.  In the words of the great Anthony Anderson — star of the hit comedy Black-ish — after seeing his geeky TV son acknowledge an Asian friend at school with a head nod, “Nerdy is the new black.”  Second, the title of tonight’s episode was “The Positive Negative Reaction” — an episode which explored how each character handled the news of Bernadette’s and Howard’s pregnancy.  Well, our own After Show hosts — Adam, Tia, and Brandee — had their own reactions to the reactions.  What do you call a reaction that kicks off other reactions?  A “chain reaction” of course.  Sheldon, because I waved my nerd flag so strongly and proudly just now, will you reward me with a shout-out on your next Dr. Sheldon Cooper & Dr. Amy Farrah Fowler Present Dr. Sheldon Cooper’s Fun with Flags?  Sorry about that; I forgot that you’re not a lone wolf anymore.  But I digress … 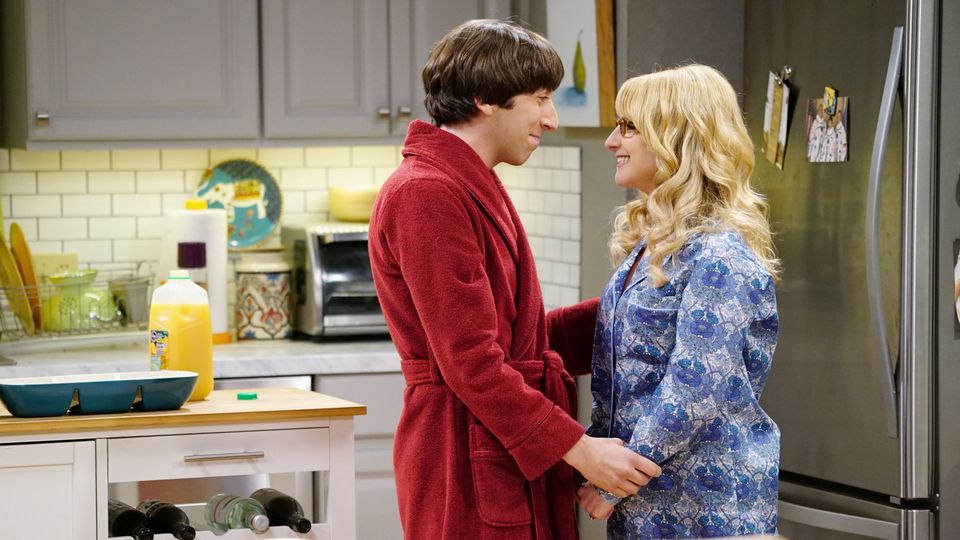 So if any of you remember your order of operations lessons from elementary school, you’d know that anything multiplied by a “Howard” will always result in an exaggerated response.  Since I’m not a parent or married, I really don’t have first-hand experience what a pregnancy announcement feels like.  However, Adam and Brandee — who’s expecting by the way — have walked, and are currently walking, in Mr. and Mrs. Wolowitz’s shoes.  Adam has experienced that tidal wave of emotions — What am I going to do?  Babies are so expensive? — and later calmed down knowing that everything will be alright. 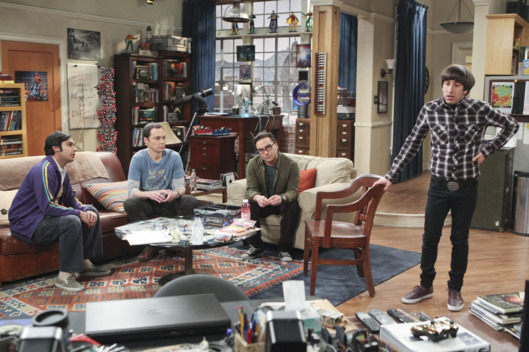 Howard’s announcement to his friends was more of a cry for advice and help.  In true The Big Bang Theory fashion, each one offered his own perspective on things, with Sheldon’s being the most hilarious and offbeat.  I do agree with Adam that this future son/daughter of Howard’s will be in great company.  Comic books, video games, sci-fi shows and movies … the kid will be in heaven!  The four friends are basically children stuck inside adult bodies.  There’s no doubt that the rest of the gang will pitch in and lend a helping hand if it becomes too overwhelming for the Wolowitzs … er … Wolowitzes … er … Wolowitzi?

( Sheldon + Alcohol ) – Judgement = Not a bad guy to hang out with, but still smarter than everyone 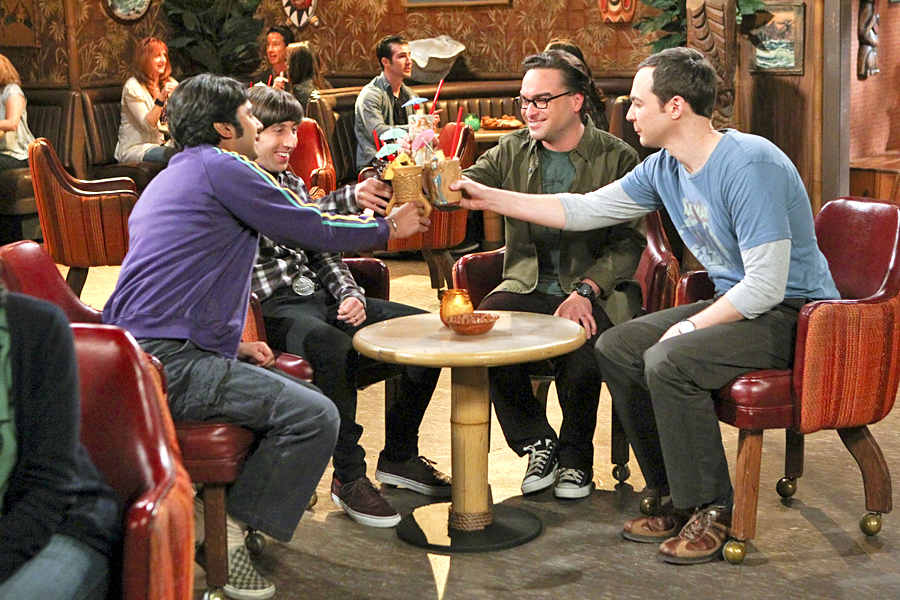 So we got sort of an emotional moment when the guys went out to celebrate with some drinks.  We all know that Sheldon becomes quite fun when he’s … ahem … a bit inebriated.  He practically becomes a normal human being.  We can also say that alcohol probably releases the real Sheldon — someone who deeply cares about his friends.  The Sheldon we usually see is driven by logic with a heavy splash (and when I mean splash, I mean a whole Costco-sized bottle) of arrogance, but we’ve seen his softer side come out through the years.

And tonight, we saw a moment that might even make a Vulcan get teary-eyed.  Sheldon reassures Howard that he’ll be a great father because both he and Howard have a direct understanding of how hard it is growing up without one.  I’m not crying … you are.  No, those aren’t tears.  I was painting my model Enterprise NCC-1701 D and forgot to crack a window open.  It’s the fumes irritating my eyes.

But this is a comedy we’re talking about, so Sheldon goes right back to being … well … Sheldon, and hopes that Howard has twins — so he can perform experiments on them.  That’s dark, Cooper … real dark.

Howard still has a problem though.  How is he going to make some extra scratch to support his growing family?  After coming up with an idea to apply Leonard’s and Sheldon’s research to a practical problem, Howard hits a roadblock.  To the team’s envy, Sheldon fools around with a solution and proves that when he’s drunk, he’s still smarter than everyone.  Host Brandee posed a great hypothetical future where Howard’s idea takes off and he becomes the next Steve Jobs, but his personality still remains the same.  Take note CBS, that would make a great flash-forward episode. 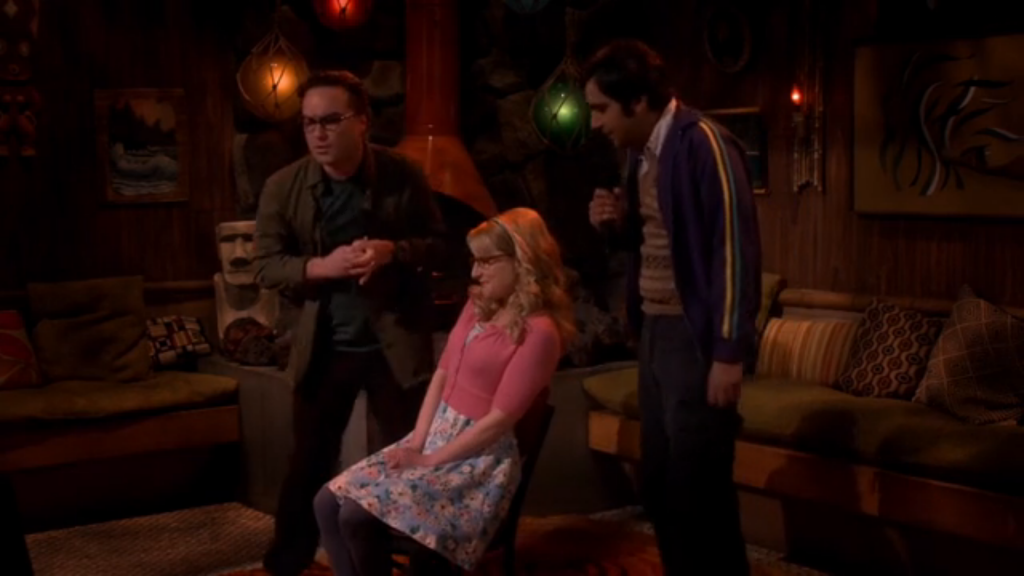 The final scenes were the “cherries” on top for this great episode.  Bernadette sitting on stage and being embarrassingly serenaded to by all her friends belting out baby-themed songs — or words that had babies in them  (although Sheldon really sidetracked with his rendition of “My Country, ‘Tis of Thee”) — and Sheldon finally sobering up enough to have a real reaction to the knowledge of where exactly Howard and Bernadette conceived their baby.

This was a great episode that hit high notes in terms of both comedy and emotion.  What were your favorite scenes?  Hit us up.  Adam, Tia, Brandee, Cherise, and I would love to hear from you.  So sound off in the comments!