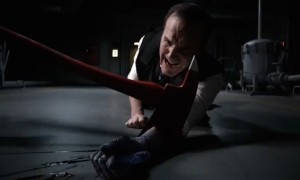 Season 3 of Agents of SHIELD is in full swing now and has been moving at a sprint since the premiere. Questions are being answered and new mysteries are being revealed and explored every week. The writers seem eager to not make the mistakes of season 1 again (whether they had any choice in the season 1 issues  or not is another debate). The one thing they haven’t discussed or revealed its origin is Coulson’s new hand. Where did he get it? Who made it for him? Why are they ignoring this detail, yet still teasing us with little bits about his hand each week? These questions and more have been bugging me about his hand this season so I felt we should take a close look at who in the Marvel Cinematic Universe would be capable of crafting such a unique prosthesis.

Before we dive into who could have made it, we need to get the obvious choice out of the way, Fitz. While Fitz has shown he is brilliantand technically skilled enough to have created the hand it couldn’t have been him. Fitz was so consumed with finding Jemma that designing and building a hand for Coulson was not on his radar. That isn’t to say we won’t see Fitz giving Coulson some upgrades later on in the series, but there is no way he was the one to build that hand. 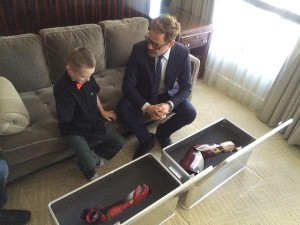 Tony is the most obvious choice for this, for many reasons. He is a brilliant designer, mechanical engineer, and clearly this is in his wheel house. The biggest problem is that we have no evidence that Coulson has revealed himself to Stark. Since Coulson announcing his return to the land of the living to the Avengers would be a powerful scene in the show or future film, it won’t be used lightly. 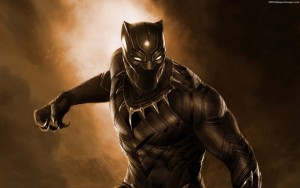 This is a long shot for many reasons, but Black Panther is in the MCU so he should be mentioned. He is a possibility because he is a technical genius and has the resources to put together something as advanced as Coulson’s new hand. As big of a Black Panther fan that I am, it isn’t him. The two biggest reasons are because we haven’t officially met him yet in the MCU and Wakanda is a notoriously isolationist country so they wouldn’t be on good terms with SHIELD, let alone develop technology for them.

Arnim Zola? How in the world is this even a possibility? It actually is very possible if you remember a few things from the two Captain America films. First in The First Avenger, when Zola is fleeing the first Hydra base, he grabs a bunch of documents and blue prints. Among those we catch a quick glimpse of the robot body that would be his iconic form in the comics. We never see this on film in all its glory, but it does indicate to us that he was working on forms of advanced robotics. Secondly, he worked for SHIELD for a very long time. All the time he was working for SHIELD it is safe to assume that he continued that research and that it is very possible his schematics became apart of the information contained in the toolbox. It wouldn’t be that hard for a highly skilled SHIELD tech to take those designs and craft a hand for Coulson. If we expand this theory out, it is possible that the tech that was designed for Deathlok originated here and the blue prints were given to Ian Quinn. I honestly think this option has the most merit.

Those are my top options of the source of Coulson’s new hand. What do you think? Did I miss someone that was the obvious choice or are just supposed to ignore this and just take for granted that he has a new hand now move along? Let us know what you think and don’t forget to watch this weeks Agents of SHIELD After Show!