LIVE! From the Future…with Stuart Paap! 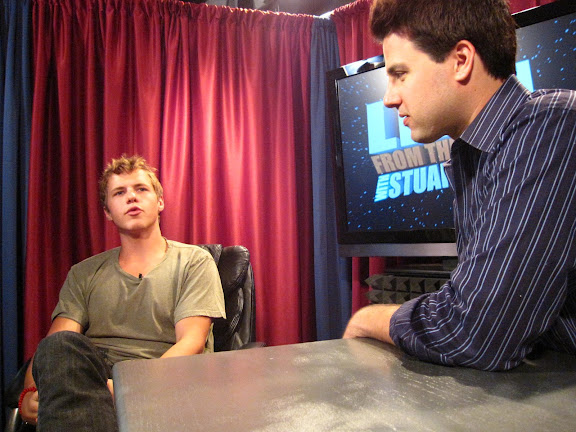 Kids – what a great show! We triple-strapped on our adult diapers and got right to the party! First up, we played a twist on an old classic chatroom game. It was You Supply the Setup! (See what we did there?) But things went a little more awkwardly than planned. Thanks chatroom! At least Jessie was back and looking buff from the bar method. I guess cutting out blow and booze does make a difference in your health… amazing.

(Jessie shows of her guns and sweet smile! Love you Schneiderpants!!!)

Then, Kevin G. Schmidt came on the show to discuss his funny and clever web series Poor Paul (Season 2 just released), which is about 3 roommates trying to co-exist. Check it out at PoorPaul.com or at Koldcast.TV

Kevin got his start in the business at age 10 and has been working ever since. He was in Cheaper by the Dozen, currently works on the Young and the Restless and is in the new Chipmunks movie which comes out around Christmas. Then we played a game called: He’s the Schmidt! where Kevin had to guess which other (much less) successful Kevin Schmidts were which. (It’ll make sense if you watch).

(Kevin and Stuart take quick power-naps in the middle of the show.)

Next up was the lovely and vivacious Kelly Stables. We talked about her impressive web series called Soul Fire Rising… She plays a winger in the series, which is a guardian angel, but things don’t go as planned. In the show she gets to hold a flaming blade of death, fight demons and even fly. Hey, I want that job!

Kelly also talked about her new Christmas movie on ABC Family, her extensive voiceover work, and what is what like to kiss Charlie Sheen on Two and a Half Men. Most importantly, we learn how to convince any woman to take her shirt off… it has something to do with wearing an earpiece.

What are you waiting for? Click it and watch…

“LIVE! From the future… with Stuart Paap!”

A LIVE interactive late night comedy talk show from the future.
Subscribe to our show HERE!
Watch all our shows HERE!
Follow us of Twitter HERE!