The classic literary novella The Strange Case of Dr. Jekyll and Mr. Hyde by Robert Louis Stevenson is the source, and a stage version is nothing new, but for most horror fans the J/H character is cinematic. Whether it’s John Barrymore from the silent version, or Michael Caine in the gory 1990 redux (or even as a female in versions such as Dr. Jekyll & Sister Hyde, or Jacqueline Hyde), that’s how we know the story.

Yet, one doesn’t need to have read the frightening fable, seen a film or watched a play to know what a reference to “Jekyll and Hyde” behavior means. Indeed, the terrifying tale of the scientist who drinks an experimental spirit and releases an evil that lives within him only to be consumed by it, has shown itself to be curious enough to invite translation into all kinds of cultural trends. 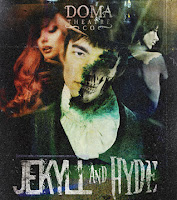 Jekyll & Hyde: The Musical, running throughout the month of July at The MET Theater, is not a new play (it’s a Tony nominee, with an avid following since in Broadway debut in 1997) but the crew and players are. With Chris Kerrigan in the lead, and Amber Gildersleeve (Emma, the faithful fiancée) and Cassandra Nuss (Lucy, the tart with a heart) as the women in Edward Hyde’s dangerous orbit, this musical hits all the right notes. (However, it should be noted that while it’s billed as a “rock/pop extravaganza” under the tutelage of wunderkind musical director Chris Raymond, I, personally, found the songs and arrangements more Sondheim than Sonic Youth.) Visually, it’s economic but effective. Costumes, especially considering the size of the ensemble in the small space, are impressive in detail, fit and color.

Book and lyrics follow the cautionary tale closely enough, but there are a few saucy segues bringing to mind a touch of Cabaret — most notably an ensemble bump and grind dance number (“Bring on the Men”) taking place in the brothel where Lucy works. While Nuss gets most of the best songs and her tough yet vulnerable mien make her an even more sympathetic character than the eponymous lead, it’s Kerrigan who is the star. His voice is as powerful as any rock god (it’s no surprise he just finished a stint in a staging of The Who’s Tommy) and his physicality as the monstrous Hyde in on par with the best of the cinematic mad scientists.

Horror fans in search of the grand guignol (or a “splash zone” ala Re-Animator: The Musical) might want to alter their expectations, but if you are looking for an entertaining, well-acted and passionately performed play, J/H is not to be missed.