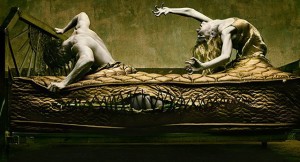 I guess most of us just naturally assumed AHS season 6 was happening and have already started speculating as to what theme will be… but it was actually only confirmed today! REJOICE!

It was officially announced by FX Networks CEO John Landgraf who went on to say this:

“With the sixth installment coming next year, ‘American Horror Story’ has unquestionably joined the ranks of television’s landmark series,” Landgraf said. “From Murder House to Hotel, AHS has pioneered a new television form as well becoming FX’s highest rated show — while also pushing every conceivable boundary of creative excellence and audacity. This is even more remarkable because Ryan and co-creator Brad Falchuk tear up the playbook every year, challenging the entire creative team to come up with something even more spectacular, frightful and entertaining. You could not ask more of an artist, their team or a series and with every new installment they deliver.”

I know we are not even halfway through a mind blowing season of new level messed up AHS shenanigans, but one cannot help but ponder what’s in store for us next year!? My favorite fan speculation on themes would have to be AHS: Crew Ship. A ship would be a pretty amazing setting an supply never ending possibilities of bloody horror goodness!

My next fave would have to be AHS: Los Angeles Bus System.. but that maybe a little too scary even for Ryan Murphy.

Tweet me your predictions for season 6! We got this!