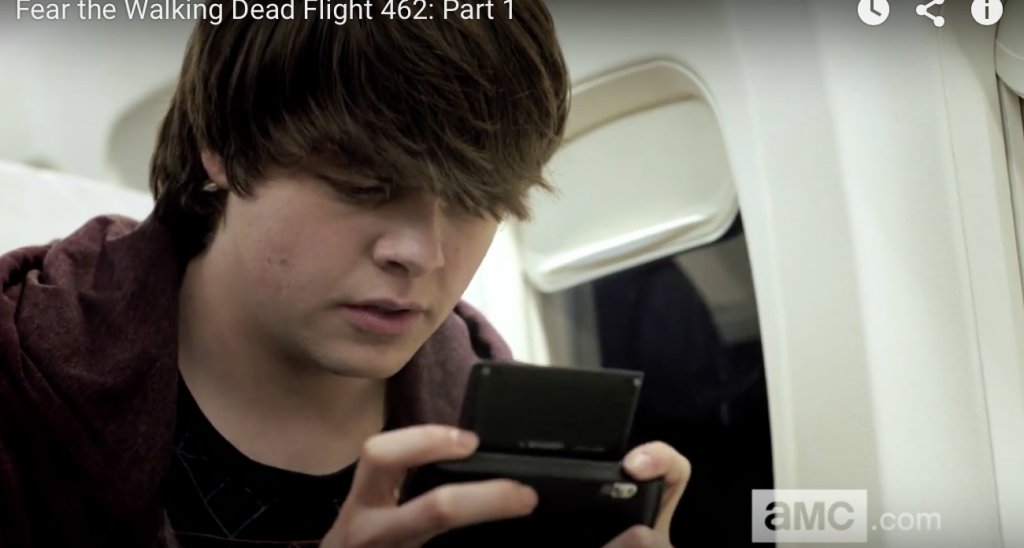 The season finale most definitely provided content we the audience have been DYING for all season long. Our predictions were correct, Daniel Salazar released the arena of zombies as a diversionary tactic, Strand joined the group and Liza died. Now that the season is over, AMC has released the first in the 16 part web series called Flight 462. The slew of no name characters we’re introduced to are as follows;

Here we have scared teenage boy trope. I understand that FTWD is supposed to take place in 2010 but I have a hard time believing ANYONE loved using these sidekick cell phones. 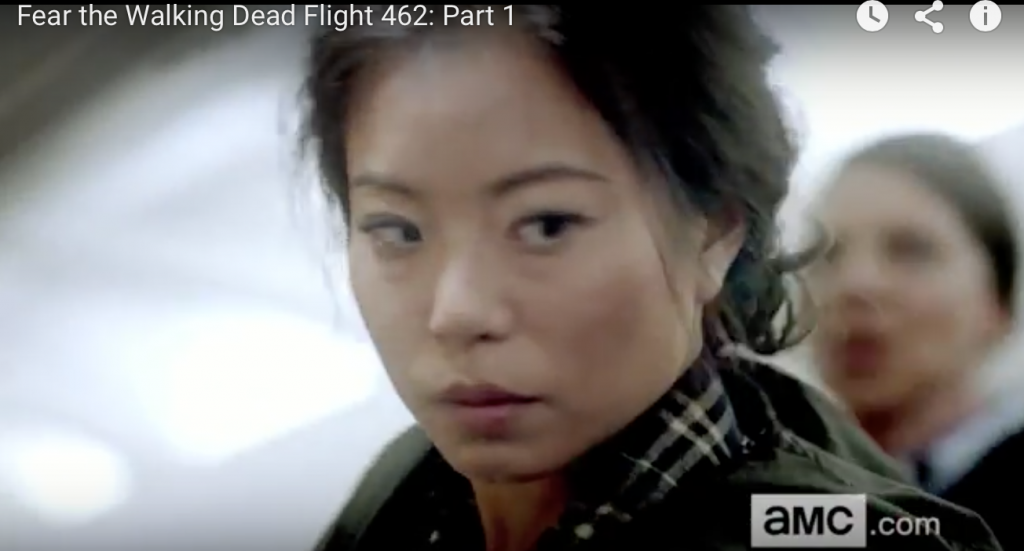 Cue dragon lady Asian trope. We were wondering who scared teenage boy was staring at, of course it’s mean asian girl who is sitting in the row in front of him and at one point slams his window shutter closed. This is a flight leaving LAX right? I don’t know about you guys but if you ever flew out of LAX, NO ONE and I mean NO ONE has the balls to do this to anyone on a flight. Unless this girl somehow winds up being a member of the Triad, this is just an over stretch in a character trying to convey “tough” which comes across stereotypically bitchy. I’m glad to see that FTWD will somehow introduce an Asian character into the ensemble but so far i’m not impressed. Steven Yeun’s character on TWD has a fantastic story arc. 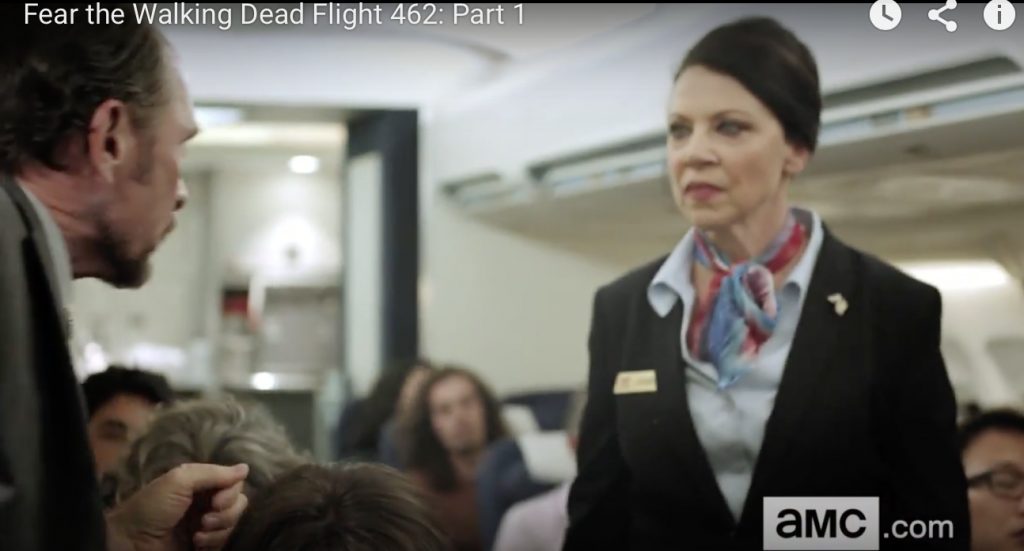 Introducing the worlds worst V.O. work for a male character and a flight attendant who already looks like the infected. 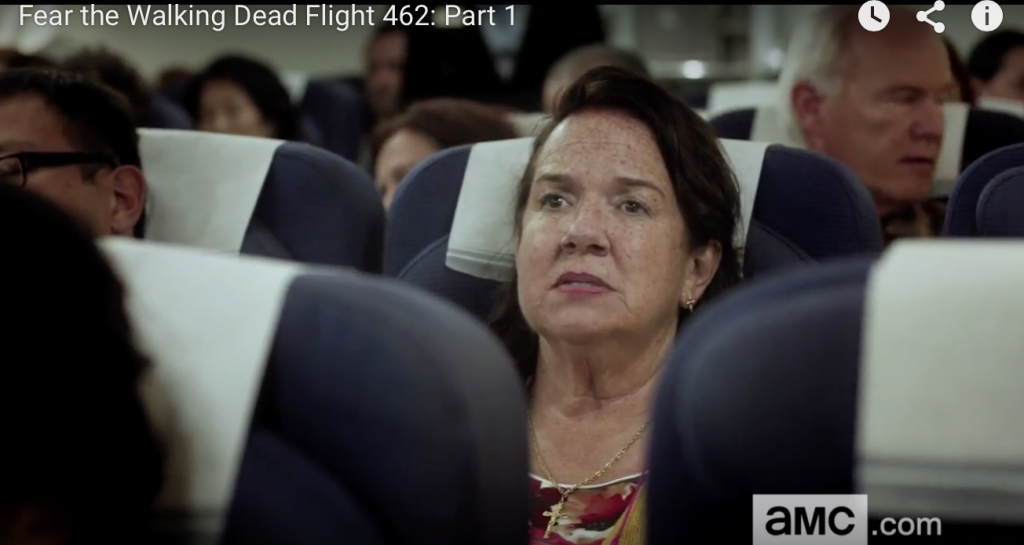 Last but not least…THIS chick! Praying LOUDLY on a flight. Seriously lady?! Could we please find more ways to include further exposition on a webisode that lasts about as long as it takes me to take a sip of coffee?!
So far i’m not all that impressed with the webisodes storyline, like many viewers I just wanna see zombies start wreaking havoc on the plane.
The season finale of FTWD ended how the show should have begun. We were all patiently waiting to see everything unravel and quite frankly it just took too long. Couldn’t they have Quentin Tarantino’d the ending, make it the beginning and lead us all the way there again? By the end of the season Travis didn’t learn his lesson, he did the right thing and that got Ofelia shot (she could’ve died but didn’t) and what’d he do? He beat the bricks off of CPL Adams. Then he is the one to shoot his ex wife because Liza somehow got bitten on the abdomen and yet I don’t feel for his character. His fake tears (they weren’t there btw) emoting and grabbing sand, the end was a glorified music video.
The only character quite honestly that I even cared about was Daniel and his love for Ofelia but when she got shot all anyone in the group cared about was Travis cry boxing over CPL Adams. I love The Walking Dead, the original show tries to develop characters and has tried it’s best to develop their female characters as thoroughly as they do their male characters. Even if we weren’t comparing FTWD to TWD, this series has a lot of work to do to get renewed for season 3. I can’t help but feel because of the split filming of the project (it’s mostly filmed in Canada with the rare pick up shots in LA) the zombies are sub par, the writing is sub par and that makes predicting the show all the more easier to do.
Posted in BLOG, Fear The Walking Dead After Show, Fear The Walking Dead Blog and tagged fear the walking dead, Flight 462