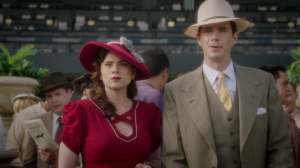 If you’ve never read a review of mine before at Goodnerdbadnerd.com, I have some important news for you: I don’t write reviews. You can get a review, LITERALLY, anywhere on the Internet. What is harder to find is a place where Uncle DumDum (that’s me!) gets to spout his nonsensical rants and raves…. I have to start off, in the sense of full disclosure, stating that I LOVE Peggy Carter. I love the way the character is written, what she stands for, and the gravity she carries. She isn’t a love interest, she isn’t a set piece, and she isn’t a prize to be won. She is a warrior of strength and conviction, who understands her personal value in a way that frees her from the indomitable shackles of the patriarchal society she resides in.

With that said, lets jump in…

I need start off by getting something out of the way… Los Angeles is NOT a dry heat. The writers go out of their way to mention this SEVERAL times, but that is simply not the case. It IS, however, something someone NOT from Los Angeles would say… Sorry… it was bothering me… I had to get it out. 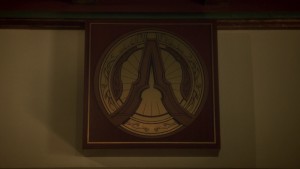 Last season, we saw Peggy take down a shadowy terrorist organization. This season it appears, and this is going to be a stretch, that Peggy will be taking down a shadowy terrorist organization. How the minds at Marvel continue to be such fountains of abundant creativity astounds me… And which shadowy criminal enterprise will Peggy be encountering in sunny Los Angeles, California? Leviathan? AIM? The Hand? The Serpent Society? I mean clearly they can’t use… wait… they are? It’s the same answer every time… Hydra. Yes, that Hydra… the same Hydra we have seen taken down in virtually every current Marvel property… sigh.

Maybe I’m looking at this the wrong way. Maybe Peggy will finally be the answer to the enigma that defeats this multiheaded monster. Wait…. Coulson is still fighting Hydra SEVENTY years later? Oh… Well, maybe she makes sure they don’t infiltrate America’s infrastructure any deeper…. Oh yeah… Winter Soldier. So what you’re telling me is that, essentially, whatever happens during this season is fruitless? Yes. That is actually exactly what I’m saying.

Why? Why would Marvel throw a world class, ground-breaking heroine into the same old story, in the same old way, with the same old outcome as all the other Hydra encounters? Why give a character capable of such incredible growth and strength the most futile end to her hard work? The answer is that, in spite of its amazing writing, strong acting, and fresh feel, Agent Carter is essentially a bridge for Agents of Shield and a subtle way for Marvel to introduce their biggest cinematic gamble to date: Doctor Strange. 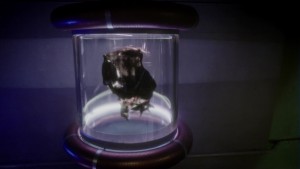 The Zero Matter, that is at the center of the bizarre science-y murder and under the control of the afore mentioned Hydra, is in reality, DarkForce, a negative energy from an alternate dimension that can be accessed and utilized by various routes, including… wait for it…. Magic. If you think about it, this is actually a super smart move by Marvel. Agent Carter has received nothing but praise for its use of strong female characters, sharp writing and great acting. Using such a well-received platform as a springboard for a truly unknown commodity, in Doctor Strange, is genius. Ultimately, Marvel wants us to be comfortable with the twists and turns its universe takes. By bringing the DarkForce into the universe through a door we all know and understand, they created a bridge of familiarity which makes the, excuse the pun, strangeness of Doctor Strange a little less strange.

Does this mean this season is doomed and will amount to little more than televised garbage? QUITE THE OPPOSITE. I am of the opinion that since Marvel is getting what they want, they have given the writers of the show the freedom to flesh out their characters in more real and lifelike ways. Most importantly, in granting such poetic license with the comic world by using an under-utilized comic book character, Agent Carter can also deal with relevant and poignant social issues that have largely been ignored by the comics community to this point. Provided they serve the ultimate purpose of setting up the other properties, of course, which, it would seem, this show is able to do.

I, for one, am excited to see how this season plays out. Maybe I’m a fanboy, but any chance I get to see Hayley Atwell don her Peggy persona, I’m going to take. Not to mention the added joy of seeing Mr. Jarvis come along for the ride.

That’s what I’ve got for you this week.

Make sure to watch Agent Carter, Tuesdays at 9pm, and then tune in Wednesdays to TheStream.TV for the Agent Carter After Show, featuring myself, Bryan Schielder and our fearless leader, Stephanie Tait.

Don’t forget to check out last weeks episode of the Agent Carter After Show!