Turns out Amy is quite the minx! Since breaking up with Sheldon, it was revealed that she has already been on THREE dates with THREE different men. Woah Amy! Where did this come from?

A hilarious focus of this week’s episode was the use of a dating app similar to Tinder. Bernadette mentions to Penny that Stuart has been on the app to find women and already secured some dates. Penny immediately decides that this is the solution to Amy’s relationship problems and together they push the app on her.
Amy is very reluctant to try it out and acts less than impressed with the groups efforts to sign her up. She sits on the couch quietly as Penny, Bernadette, Howard, Raj and Stuart find men for her. They have so much fun with the future prospects that they decide to hook up Amy’s phone to the TV for full effect! One by one the group pokes fun at the candidates which include, a shirtless man in a leopard thong, and an overzealous Stuart! They even incorporate a drinking game. 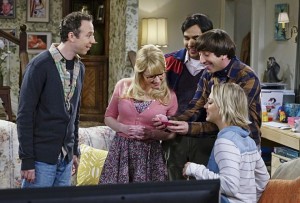 However, the laughs quickly come to a halt when a text message from Amy’s phone pops up on the screen from a man named Dave. The text says that he had a great time with her! Amy immediately tries to get them to disconnect her phone saying it wasn’t what it looked like, but soon after, a second text message pops up where he mentions he wants to go on a second date!
The group is shocked at Amy’s secret dating life. Amy tells them that she has been on three dates already but only for casual coffee and didn’t want to make it into a big deal.
The names of the other men are not revealed, but it seems this Dave character definitely will be resurfacing in future episodes!
Do you think Dave will become Amy’s new boyfriend? And how do you think Sheldon will react? To find out make sure to catch The Big Bang Theory every Thursday at 8:00pm and then join the discussion live on our #BigBangAS!
Posted in Big Brother After Show, Big Brother After Show Blog, BLOG and tagged amy, bigbangas, Dating App, Sheldon, TBBT, the big bang theory, the big bang theory after show, tinder