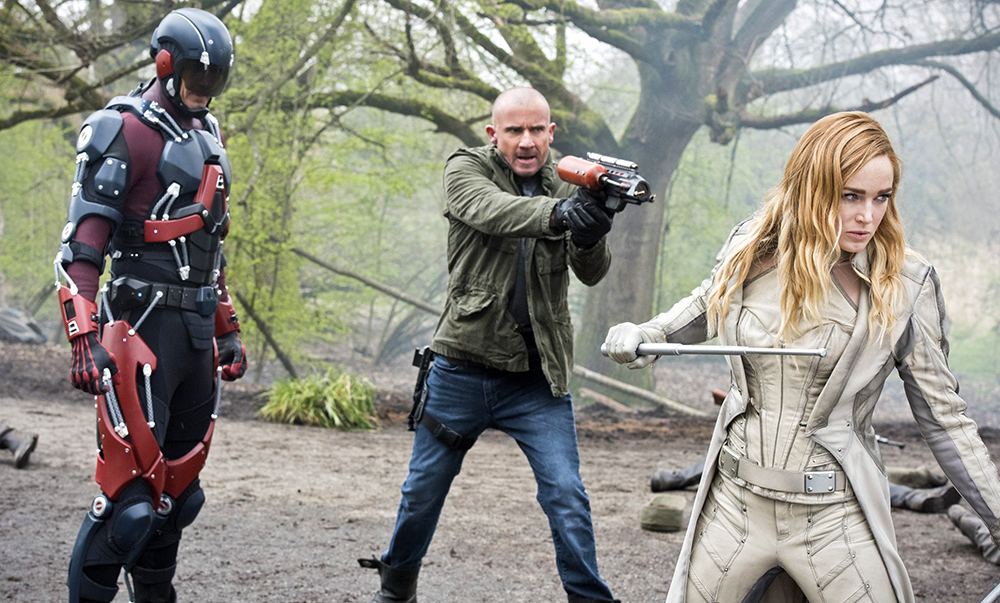 Legends of Tomorrow fans, you’re probably having a roller coaster of emotions right now. Why? The awesome first season of this exciting series has ended with the airing of “Legendary” (wah) … but it was one of the most exciting and emotionally deep episodes in its freshman run. Here to guide us through the highs and lows of this episode are our esteemed After Show hosts—Jack Hind, Tatiana Mariesa, and Rory Ross. 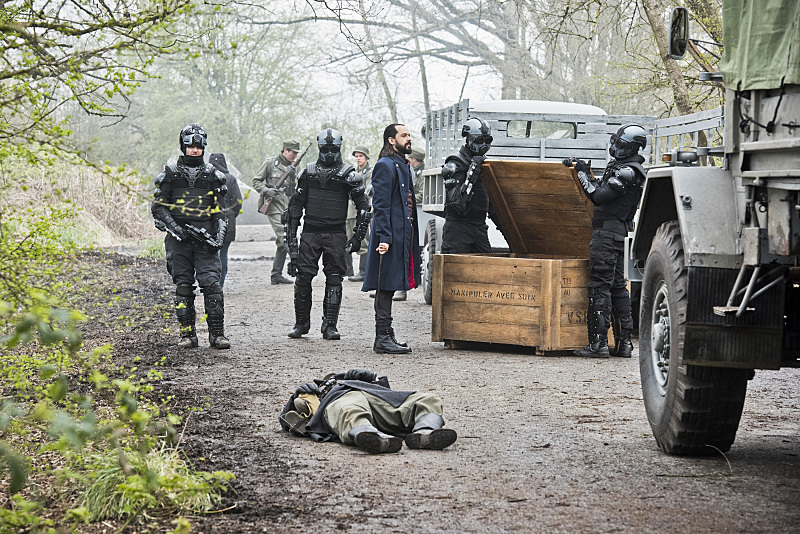 “Legendary” started off at a low-point for the whole team, with Sara’s situation being the most emotional. Little did she know, Laurel had already passed away from her confrontation with Damien Darhk. Sara would receive the bad news from her father, Quentin, when she visited the Arrow lair. Knowing that she has access to time travel, Sara attempted to force Rip into going back five months—right after the team initially left for their mission to hunt down Vandal Savage. 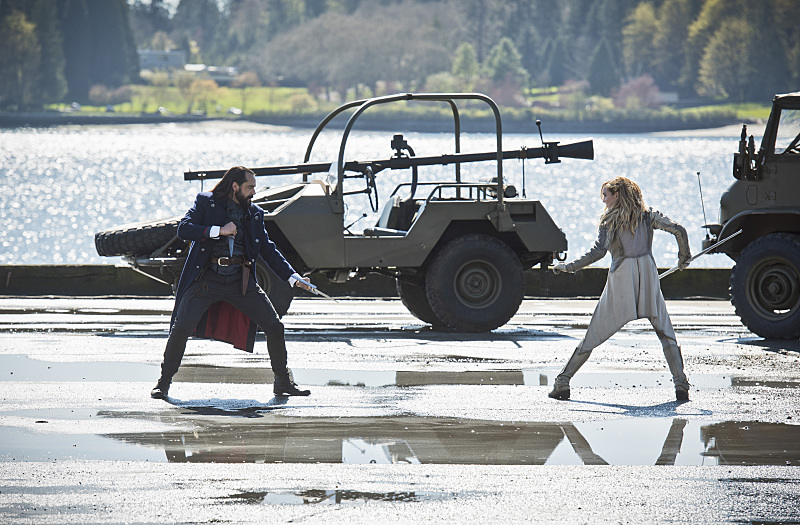 However (yes, there’s always a “however” when dealing with Rip), there’s a reason why Rip chose to return to this time—if he had opted for Sara’s desired temporal location, Quentin and Sara would’ve also died in the the battle with Darhk. Again, our Time Master knows best. Both Jack and Tatiana highlighted Sara’s reaction to the situation—putting a knife to Rip’s throat. A move that Tatiana was fully on board with. In Tatiana’s words, “She’s an assassin … take me back or I’ll kill you.” Subsequently, Rip took out a futuristic stun-light (that looked more like a pocket disco party) and rendered Sara unconscious. Like all subplots in the show, Sara eventually agreed with Rip’s reasoning to not return the team to that certain point in time—that is, to preserve the timeline. 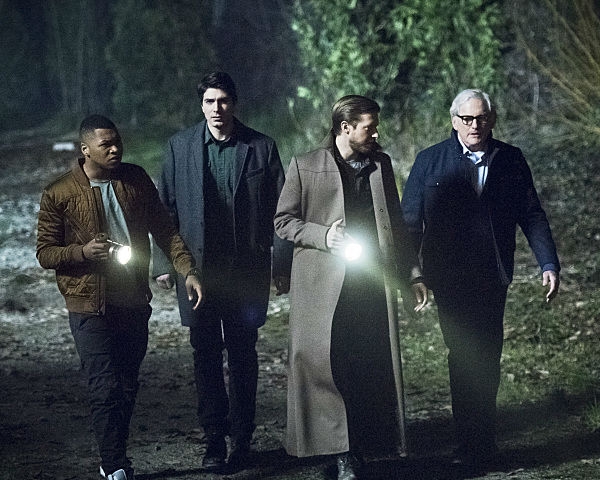 Other team members’ situations were a bit better—but not that much. Mick, with a new partner, robs a bank. However, Mick—since his foray into heroism—has changed. When his new “crony” kills a guard for no reason, an angered Mick blasts him with his heat-ray—certainly something old Mick would’ve never done. In fact, old Mick would’ve reveled in the guard’s murder. Soon after getting into his getaway car, he finds the ever-jubilant Ray as the driver. Ray suggests that maybe Leonard wanted Mick to move on and partner up with him. Yes, like Mick, I too got a bit sick. There’s mushy … and then there’s “Ray” mushy. Too bad he can’t shrink that awkwardness. 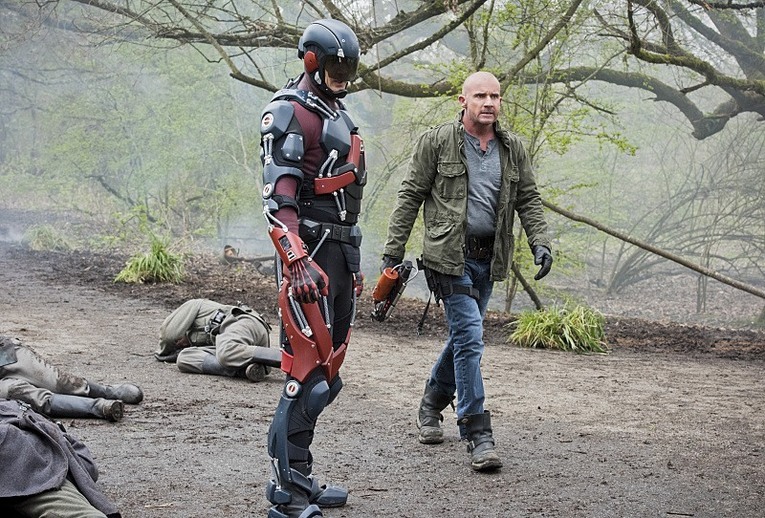 However, Mick is able to bring the real emotions—ones that aren’t cheesy—into the forefront when Rip gives him the gift of traveling back to 2013. There, Mick meets with 2013-Leonard at a bar and tells his best friend how he really feels about him: one of the best guys, and a hero to Mick himself. Hey, I’m not crying. It’s Mick’s heat-ray. It dries up the air near my eyes. Anybody got any Visine? Though I’d give Mick full credit for his little speech, Tatiana, as much as she likes to make fun of Ray, thinks that the boy scout’s attitude and personality must’ve rubbed off a bit on our ruffian.

It’s What Season Finales Are All About 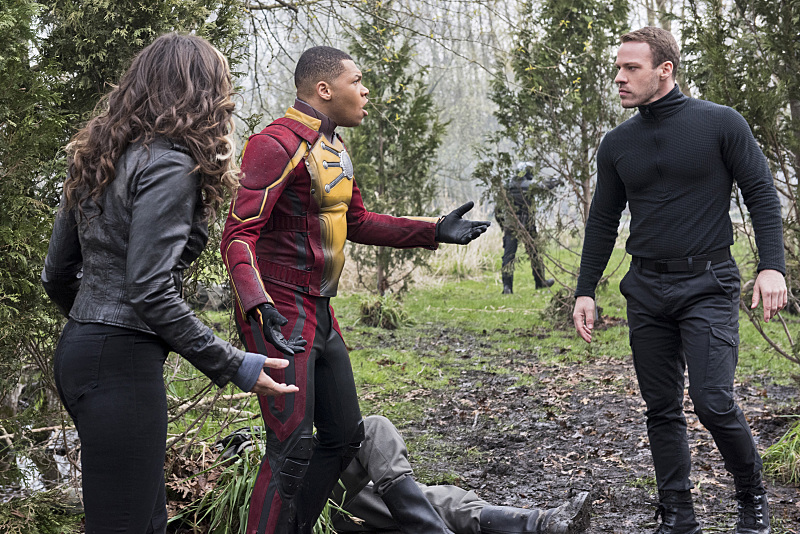 If there’s one thing Legends of Tomorrow is an expert at, it’s the the ability to leave big! Why have one battle when you can have three of them in three different time periods!? Oh, and did I forget to mention—with three Savages. The setup for this finale has been occurring throughout the season. Rory became aware of this early on and was given confirmation of his hypothesis when they mentioned Thanagar. 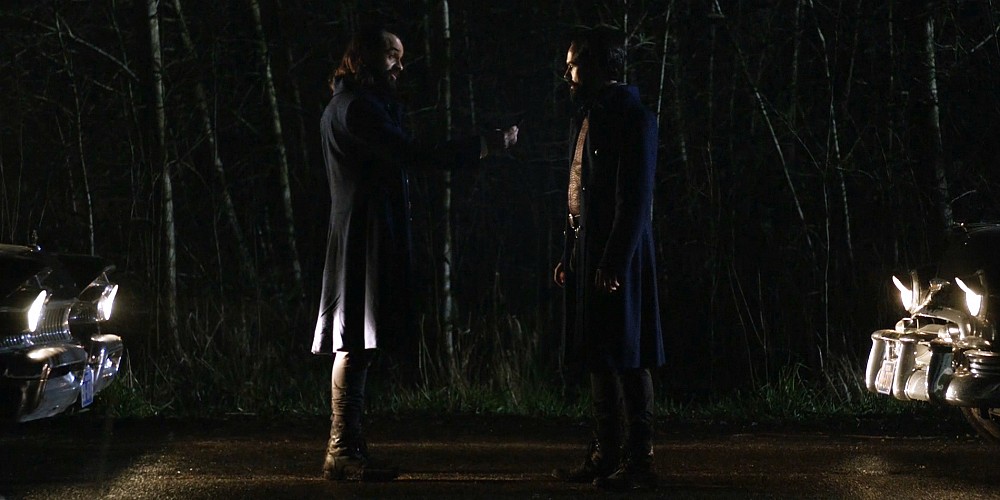 With the meteorites playing a large role in Savage’s plan, Martin Stein soon works out a solution—or moreso a discovery—where the same radiation that gave Savage his immortality would also render him mortal. The key now was to kill Savage in the three different time periods when Earth lined up with Thanagar. For Jack, this seemed a bit too easy, a bit too deus ex machina-ish. I really didn’t have a problem with that because—as Tatiana mentions—the meteorites weren’t on the forefront of everyone’s minds. Once it was there, the genius Stein quickly figured it out. So it was actually a great consistency in characterization. 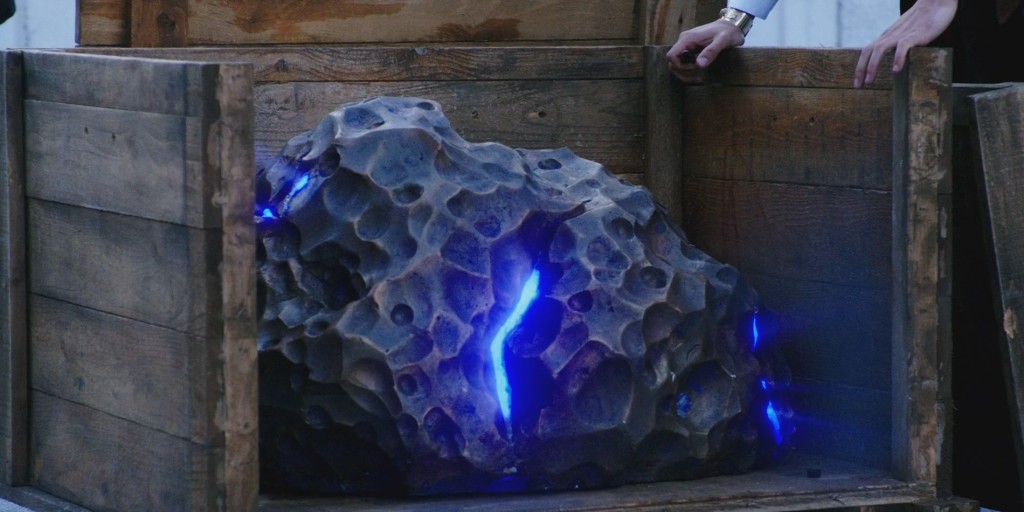 As the Legends broke into three sub-teams, they successfully killed Savage and safely diffused the meteorites in their respective time periods. However, the meteorite in 2021 had already reached a point-of-no-return, prompting Rip to sacrifice himself and take it into the sun. The poignant moment came when Rip hallucinated his dead wife and son, sharing a final moment with them. His motivation to live was soon reignited by a strangely self-preserving Gideon who stated that she “didn’t want to die.” In true science-fiction fantasy form, Rip is informed that the Waverider’s solar array has been charged to 1200% efficiency. And so, the Waverider makes a dramatic reappearance seconds after it departs out of sight from the team. Hey, that’s time travel for you. 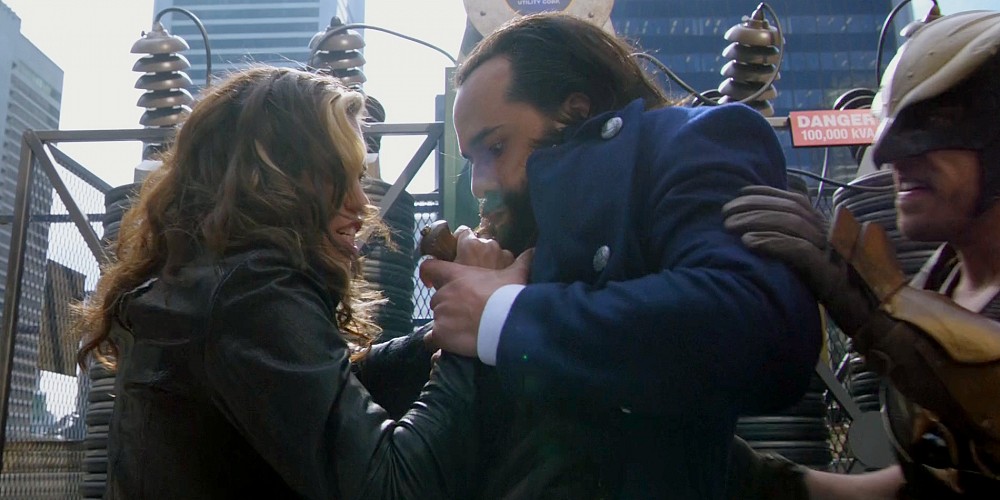 Yep, with Season One over, the Legends are now accepting applications (or would you audition to be a member?) for a few vacant spots. Three to be exact—one left by a supposedly deceased Leonard, and two more by Kendra and Carter who have flown off to nest (pun intended) and take some time for themselves. Well, talk about a coincidence, because one candidate put his name in during the final scene—Rex Tyler, a.k.a. Hourman! And he may be bringing some friends along also—the Justice Society of America! 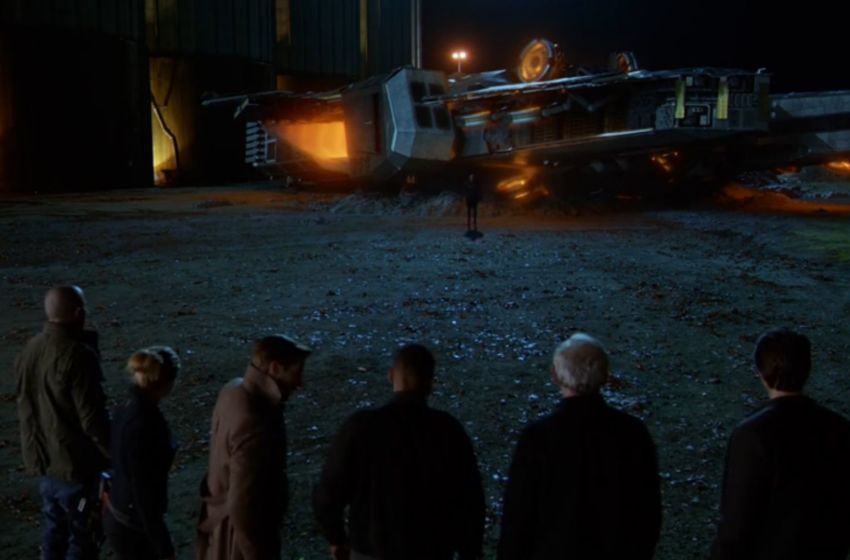 Even before Rex was introduced, Tatiana already had someone in mind—Jonah Hex. I wonder if that would be too “cowboy” for the Waverider. We already have Rip—who admittedly said he had an affinity for the Old West—and Mick and Ray. Mick because he does have a tendency to just go wild and not follow the rules. And Ray because, like Rip, he feels at home dusting off his chaps, albeit in a more romantic fashion. Hey, it’s the Boy Scout we’re talking about. What else is new? 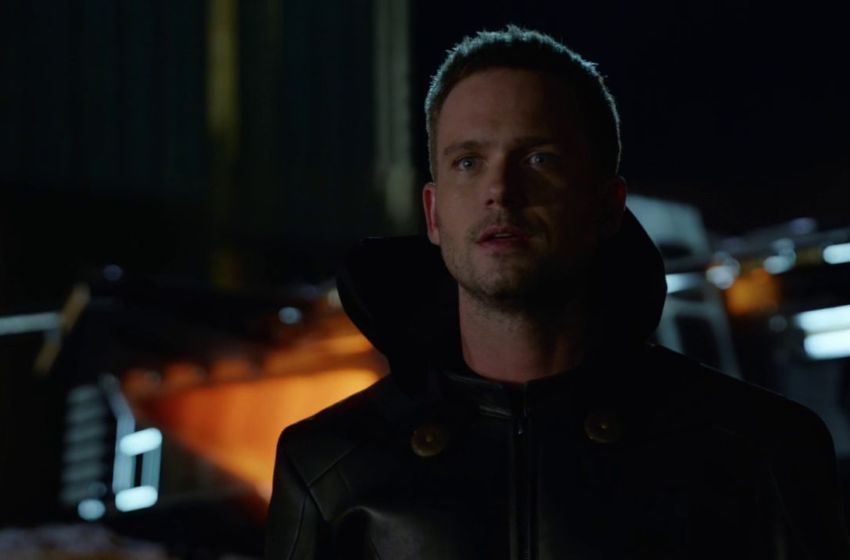 Going back to Rex, would three of the empty spots be filled by JSA members? And why wasn’t the team aware of the JSA before? Did the team alter the timeline and bring to fruition the JSA? We’ll just have to wait for Season Two to find out.

Now before we leave, our After Show gang would like to depart on some favorite one-liners:

Tatiana: I like stealing stuff, it makes me feel good.—Mick

Jack: I don’t want to lose another friend.—Mick when Rip proposed sacrificing himself in order to safely discard the meteorite into the sun.

Rory: Every time they do that, I get hungry for chicken. —Mick when Kendra and Carter sprouted their wings and flew off.

Is it safe to say that Mick has the best comebacks? I fully agree with Rory. The “chicken” line was also my favorite. To add to that, I thought what really put it over the top was Sara’s reaction of semi-disgust right after he said that.

And the wait begins. It’ll be five months before we see our Legends again. However, on the bright side, it gives us plenty of time to discuss the awesomeness of Season One, and it also allows us to speculate on the future adventures of our heroes.

What did you think of the Season One finale, “Legendary”? What were your favorite one-liners? Who do you think will join the Legends in Season Two? Jack, Tatiana, Rory, and I want to hear your thoughts, so sound off in the comments!

You can also read my written recap of “Legendary” at Bam Smack Pow.