Last week on “Survivor: Second Chance” Episode 4 “Where’s the Beef” we sadly had to say goodbye to Jeff Varner. Although we’re still crying our eyes out over his torch being snuffed, we love that Jeff has been giving some amazing interviews. One of our favorite interviews was with Xfinity’s Gordon Holmes where Jeff Varner revealed a lot we didn’t get to see on the show. 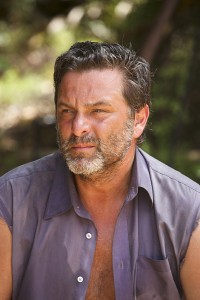 Here’s 5 things you didn’t see on “Survivor: Second Chance” according to Jeff Varner:

1. Vytas took Shane’s spot in a pre-game alliance between Varner-Terry-Kelly Wigglesworth-Shane (who didn’t get voted back in the season)

“Vytas had stepped into this whole alliance and was taking the place of Shane and I didn’t like it. I felt like he was hijacking my alliance. And he was throwing my name out there as someone to vote out. I was like, “You’re supposed to be with me. What’s going on here?” It was easy to vote for Vytas even though I love him. But that vote was to wake Kelly and Terry up, because I knew in episode two I was going to go back to them.”

2. Terry pissed off the women on his original tribe

“Terry’s social game was so bad those first three days. He pissed off all the women… There was one time Abi was reading the first immunity challenge clue and her English is a little broken. So, she was struggling and jumping and Terry grabbed the paper and said, “Let somebody who speaks English read it.” And all of the sudden all of the eyes swing around to Terry. And Shirin is pissed and Wentworth is pissed. Then Terry goes to Peih-Gee and says, “You can be our number seven.” He offered her this really horrible deal. Things that you’d think a seasoned “Survivor” player wouldn’t do, Terry did.”

“When we chose our buffs in our little boxes, Kimmi dropped her box at my foot. And I dropped mine. We reached down to pick them up and she whispered, “Don’t trust Andrew, he can’t keep his mouth shut.””

4. Jeff thinks Tasha is a bitch!

“And when we get to Angkor she was so sweet to everybody. But she looked at me and she’s a bitch. She’s just hateful and closed off. The more I tried to be nice to her the harder she got. She’d wake up in the morning and say, “Good morning, everybody.” Then she’d look at me and be like, “Are you looking for an idol!” I got nothing from her. Everywhere I went she was right on my heels.”

“Narcissist, arrogant, drinks his own Kool-Aid. Tries to make you think he’s Terry Deitz. Terry is everything Savage is not. And the editing is showing Andrew as some great man, but that’s not my memory.”