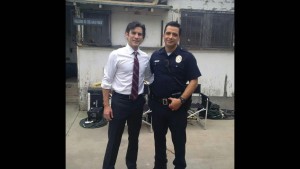 If you tuned into the after show on Wednesday night, you would have seen our guest Franco Barberis giving us the inside scoop on life on the set of American Horror Story. Barberis had a small role as “Detective Peña” alongside Wes Bently in Episode 2 – Chutes and Ladders. Here are 5 we learned from him: